South Africa’s policy of black economic empowerment (BEE later BBBEE) is not simply a moral initiative to redress the wrongs of the past. It is a pragmatic growth strategy that aims to realise the country’s full economic potential while helping to bring the black majority into the economic mainstream. In the decades before South Africa achieved democracy in 1994, the apartheid government systematically excluded African, Indian and coloured people from meaningful participation in the country’s economy. Despite the many economic gains made in the country since 1994, the racial divide between rich and poor remains.

One element of Broad-Based Black Economic Empowerment (BBBEE) policy is companies’ contribution to socio-economic development. This is translated into encouragement for companies to give back to the community through Corporate Social Investment (CSI). Under the BBBEE guidelines 1% of net profit before tax should be spent on social development, whereby companies are encouraged to have at least 75% non-white beneficiaries. BBBEE is enforced through preferential procurement, and compliance is necessary when companies aim to do business with government or large corporations. Most companies operating in South Africa therefore have a CSI policy whereby they support some form of charity or other type of development projects.

Black economic empowerment – or broad-based black economic empowerment, as it is technically known – is not affirmative action, although employment equity forms part of it. Nor does it aim to take wealth from one group and give it to another. It is essentially a growth strategy, targeting the South African economy’s weakest point: inequality.

Black economic empowerment is an important policy instrument aimed at broadening the economic base of the country – and through this, at stimulating further economic growth and creating employment. The strategy is broad-based, as shown in the name of the legislation: the Broad Based Black Economic Empowerment Act of 2003. This reflects the South African government’s approach, which is to “situate black economic empowerment within the context of a broader national empowerment strategy  focused on historically disadvantaged people, and particularly black people, women, youth, the disabled, and rural communities”.

Through its BEE policy, the SA government aims to achieve the following objectives:

The Broad-Based Black Economic Empowerment (B-BBEE) Codes of Good Practice emerged in 2007 to provide a standard framework for the measurement of BEE across all sectors of the economy. The codes require that all entities operating in the South African 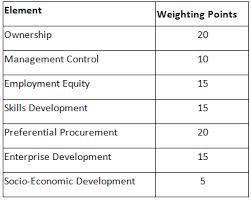 economy make a contribution towards the objectives of BEE. The first phase of the codes encourages all entities, public and private, to implement proper BEE initiatives through the issuing of licences, concessions, sale of assets and preferential procurement. The second phase of the codes covers the seven components of the B-BBEE scorecard, namely: ownership; management control; employment equity; skills development; preferential procurement; enterprise development; and socioeconomic development (including industry-specific and corporate social investment initiatives). The Strategy on B-BBEE, released in 2003, assigns points values to the seven elements as shown in the image of the BBEE scorecard.

Private companies must apply the codes if they want to do business with any government enterprise or organ of state – that is, to tender for business, apply for licences and concessions, enter into public-private partnerships, or buy state-owned assets. Companies are also encouraged to apply the codes in their interactions with one another, since preferential procurement will affect most private companies throughout the supply chain.

The codes of good practice allow foreign multinational companies that do business in South Africa some flexibility in how they structure their empowerment deals. In particular, the B-BBEE Codes of Good Practice acknowledge that there may be multinationals whose global practices prevent them from complying with the ownership element of B-BBEE through the traditional sale of shares to black South Africans.
In such cases, the codes allow for contributions in lieu of a direct sale of equity. These contributions, known as “equity equivalent” contributions, count towards the ownership element of B-BBEE. The value of these contributions may be measured against 25% of the value of a multinational’s South African operations, or against 4% of the total revenue from its South African operations annually over the period of continued measurement. Foreign multinationals can submit proposals for Equity Equivalent Programmes to the Department of Trade and Industry for approval by the Minister of Trade and Industry in South Africa.

The DTI has all the relevant documents and information on black economic empowerment available on a dedicated website at bee.thedti.gov.za. The site includes features such as: