The Free State is South Africa’s most centrally located province. It has borders with most other provinces and has Lesotho as its eastern 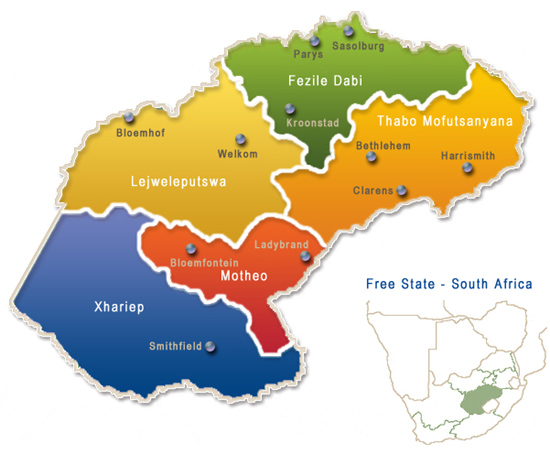 neighbour. Important road and rail links traverse the province, including two of the busiest national highways, the N1 (Cape Town-Johannesburg) and the N3 (Durban- Johannesburg). Plans are in place to leverage this advantage through the creation of development corridors (Gauteng-Free State-KwaZulu-Natal and N8 Corridor), the bolstering of train services (freight and passenger) and the promotion of warehousing and storage opportunities. The Harrismith Logistics Hub (HLH) on the N3 is at the centre of these plans, and some success has already been achieved in persuading companies to locate their businesses there.

Mining and agriculture were for many decades the bedrock of the Free State economy. The north-western part of the province sits on top of a rich gold-bearing reef more than 400km long, known as the goldfields region. South Africa is the world’s largest gold producer, and the country’s largest gold-mining complex is Free State Consolidated Goldfields, with an area of 330km2.

Large percentages of South Africa’s agricultural production, particularly grains, originate in the Free State. More than half the nation’s sorghum, nearly half the sunflower and more than 30% of all wheat, maize, potatoes and groundnuts come from the fertile plains of the western and Northern Free State while the valleys of the east produce almost all of South Africa’s cherries and asparagus. Livestock and flowers are other important agricultural products.

Critical to re-engineering the Free State economy is the necessity of building manufacturing capacity. As Premier Ace Magashule put it in his 2012 State of the Province address, “Undoubtedly we require a comprehensive industrial development strategy for the Free State.” The premier was talking in the context of provincial growth rates of between 2% and 3% for 2010 and 2011. In his 2013 State of the Province address, however, Magashule noted that the Free State’s contribution to the national economy declined by about 11% between 1996 and 2010, and is projected to decline by another 4% between 2010 and 2015. With the primary sector (notably mining) declining in importance in the province from 50% of economic output to 13%, employment numbers have dropped. Finance MEC Seiso Mohai addressed this problem directly in the Provincial Budget Speech in March 2013: “We must transform and develop the main industries in our province, namely, mining, agriculture, manufacturing, tourism and infrastructure (both physical infrastructure and ICT). We must create and sustain the value-adding production sectors in mining and agriculture through beneficiation and agri-processing. We must also expand the manufacturing sector beyond the dominance of petrochemicals to include textiles and food processing as large portions of the manufacturing sector.”

The current state and shape of Free State’s economy clearly presents huge opportunities for investors in the manufacturing sector. The Free State Development Corporation (FDC) is actively searching for investors, and giving them a helping hand, as in the construction of factories in the Harrismith and Botshabelo areas. The opening of a Makro store in Bloemfontein, and extensions being carried out on other retail malls, indicate that a recovery in the provincial economy is under way. Massive investments by companies in the oil and gas and petrochemical sector in Sasolburg have also boosted the economy. In agriprocessing, a number of opportunities exist in the province. Some products that are being explored are cherries, asparagus, vegetables, wholesale meat, leather and increased seed production in the province’s eastern reaches. Tourism is another sector that is being targeted as the province seeks to diversify its economy away from an over-dependence on agriculture and mining.

Economic planning for the province is attempting to integrate industrial development, rural development and the creation of sustainable small-, medium- and micro- enterprises. New economic drivers being targeted include logistics, ICT, innovation and research, agri-processing and manufacturing in sectors such as pharmaceuticals. The Sasolburg complex in the province’s northern section is a highly industrialised and efficient focus of high-level production. As the headquarters of Sasol, and the site of the company’s wax and chemical plants, the town is a major contributor to South Africa’s manufacturing sector. Several other chemical companies operate in the town. ChemCity is a business incubator downstream project promoting the sustainable use of byproducts from Sasol’s many plants. Sasol has recently made a series of investments to increase its capacity, with the wax production project representing the single biggest investment in any one project in the province’s history. In 2012, Omnia opened its new nitric acid plant, a development that cost R1.4-billion.

The landscape is characterised by wide open spaces in the west and beautiful valleys in the foothills of the Maluti mountains in the east. The province is sparsely populated, with a population of less than three million people mostly living in the north and east of the province. Sotho is the most widely spoken language, followed by Afrikaans. The region receives its rainfall in summer but sometimes the west and south can experience drought. The province is relatively well watered, with the Vaal and Orange rivers defining its northern and southern boundaries. In addition, a network of smaller rivers run through the area and run-off from hills and mountains ensure that the good soils of the area are well irrigated. The Gariep and Vaal dams are major sources of water and venues for recreation, as are the Free State’s lesser dams such as Sterkfontein, Allemanskraal and Kalkfontein. Tourism and aquaculture are just two potential income generators related to these water bodies. 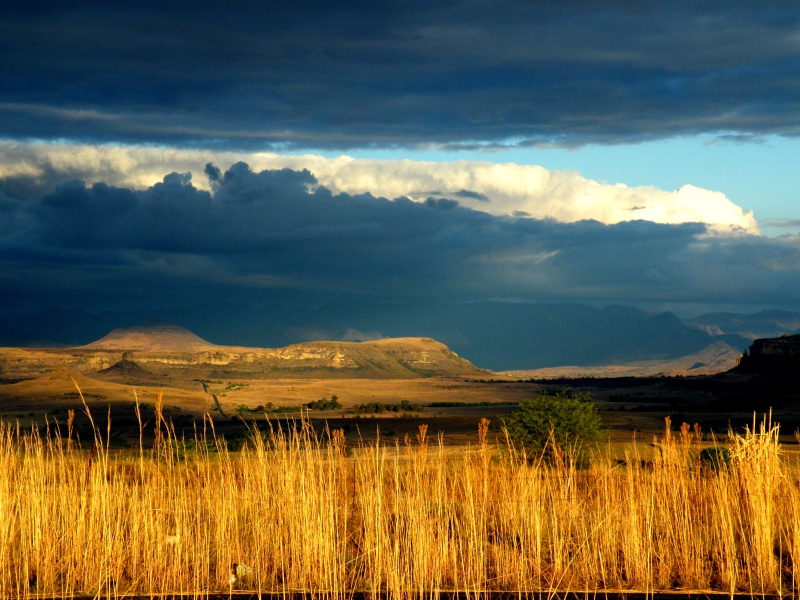