South Africa’s steady economic growth as it increasingly focuses on industrialisation, together with its mass electrification programme to take power into deep rural areas, has seen a steep increase in the demand for electricity. In fact, South Africa’s energy demand is expected to be twice the current levels by 2030. Years of underinvestment in the country’s power infrastructure has meant that energy demands are rising faster than Eskom, the state-owned company in charge of the majority of energy generation and distribution, can meet them. Together with Eskom, the government’s Department of Energy has embarked on a massive programme to bring the electricity supply and distribution system into balance. With an infrastructural price tag of around R340-billion, Eskom is building new power stations, including Medupi in Limpopo that will make its first contribution to the grid by 2013, and Kusile, which will come on stream in mid-2014.

South Africa, which has always been heavily dependent on coal, is looking at ways to diversify its power-generating capacity. The Development Bank, the Treasury and Eskom are working on a renewable energy programme that involves independent power producers. The government is also looking to support sustainable green energy initiatives on a national scale through a diverse range of clean-energy options as envisaged in the Integrated Resource Plan 2010. In terms of this plan, which is a 20-year projection on electricity demand and production, about 42% of electricity generated must come from renewable resources. The Integrated Municipal Infrastructure Project will focus on 23 of the least-resourced districts, and address all the upgrades and backlogs – including in electricity – needed to serve the 17-million people living in those areas.
Independent power producers have been introduced. Including projects that cover solar photovoltaic technology, wind, small hydro and concentrated solar thermal generators, these privately held entities and facilities sell power to the government, contributing to the country’s energy mix.

With abundant coal supplies, South Africa meets around 77% of its energy needs through coal. While it is largely used to generate electricity, a significant amount is channelled to synthetic fuel and petrochemical operations. Around 28% of coal production is exported. Sasol is an integrated energy and chemical company. It beneficiates coal, oil and gas into liquid fuels, fuel components and chemicals with the help of its proprietary Fischer-Tropsch processes. It is the largest coal-to-chemicals producer in the world. Because of its dependence on coal, South Africa is the 14th highest emitter of greenhouse gases. However, the country is a signatory to the Kyoto Protocol, committing it to reducing its emissions of greenhouse gases. The Petroleum, Oil and Gas Corporation of South Africa (PetroSA) manages the country’s commercial assets in the petroleum industry, including the world’s largest commercial gas-to-liquids plant at Mossel Bay in the Western Cape. Most of the transport fuel is produced in the coastal areas, but about 68% of it is consumed in inland in Gauteng. This requires investments in the storage and distribution facilities for the supply of petroleum products at the point of need. Transnet Pipelines commissioned a multiproduct pipeline in January 2012, which will ensure inland demand is met as well as cut congestion between Durban and Johannesburg by keeping tankers off the roads. The innovative infrastructure investment – which comprises a 712km long pipeline as well as two terminals – cost R23,4-billion to build.

Currently, around 6.5% of South Africa’s electricity is provided via Eskom’s Koeberg Nuclear Power Station’s two reactors outside Cape Town. The Nuclear Energy Policy aims to increase the role of nuclear energy as part of the process of diversifying South Africa’s primary energy sources to ensure energy security. The policy will help reduce South Africa’s over-reliance on coal. The long-term vision of the policy is for South Africa to become globally competitive in the use of innovative technology for the design, manufacture and deployment of state-of-the-art nuclear energy systems and power reactors, and nuclear fuel-cycle systems.State-owned Nuclear Energy Corporation of South Africa (Necsa) undertakes and promotes nuclear energy research and development and innovation. Its reactor- produced radiostopes are exported to more than 60 countries.

Investing in renewable energy, a big market in South Africa

Futuregrowth expects to be a major institutional funder of renewable energy projects in the near future. So far several opportunities have been approved for investment of clients’ funds under management into new solar and wind projects located in the Northern and Eastern Cape regions respectively. These comprise preferred bid tenders awarded by the Department of Energy in December 2011 under the first round of the Renewable Energy Independent Power Production (RE-IPP) program. Construction is expected to commence by mid-2012 and the projects are due to be commissioned by late 2013 to produce electricity for at least the next 20 years. 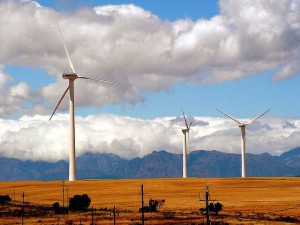 South Africa has approximately 41 000 megawatts of active generation capacity. As a result of economic growth since 1994 and increased power connections (84% of the population is now connected), South Africa’s electricity demand has significantly increased. Due to South Africa’s ageing fleet of power stations and lack of new additions, reserve margins are significantly low by international standards and have dropped to as low as 5% compared to the acceptable global average of 15%, which has ultimately resulted in load shedding.

Government estimates are that the installed capacity will need to grow by 40 000 megawatts (i.e double) in the next 20-25 years to meet current and forecasted demand. Approximately 42% (or 17 800 megawatts) of all new generation is expected to come from renewable sources and includes 3 750 megawatts of new installation by 2016 which will cost between R70bn and R80bn at today’s prices.

Coal fired plants comprise approximately 85% of South Africa’s generating capacity and most were built in the 1970s with an intended life span of up to 40 years. Apart from their negative impact on the environment, there are significant inefficiencies in transmitting power from the Mpumalanga region where most of the plants are located, to the Western and Eastern Cape. It is estimated that the normal transmission and distribution losses are up to 20% of power generated.

The renewable energy programme will see power being generated much closer to the end-user and utilise the abundance of natural resources in the country, i.e sun and wind energy.

Many of the sponsors of these new projects are international developers with renewable energy experience who have partnered with local firms with strong knowledge of the South African market. Local technology will be used in certain projects and work will also be subcontracted to local companies. It is envisaged that there will be a high level of mentorship and skills transfer by the international developers. In addition every project has a minimum BEE equity requirement which must include participation by a trust represented by the local community. There is a strong emphasis on investment by the projects into local socio-economic infrastructure and services, as well as employing local labour to build and maintain the plants.

Though electricity supplied by renewable energy developers is more expensive than conventional power (and will be paid for via an Eskom tariff) consumers can take comfort in the fact that renewable energy will not be a significant contributor to their spiralling energy costs. So-called grid-parity, or the price at which tariffs for coal- and renewable-based energy intersect, is not that far off. Given the cost of building new coal-fired plants such as Medupi and Kusile and the maintenance of existing plants, the tariff for wind power (R1,15/kWh or less) will achieve grid parity by 2015 and solar power (R2,85/kWh or less) by 2019.

Renewable power projects that are awarded contracts by the Department of Energy will enter into a Power Purchase Agreement (PPA) with Eskom that will guarantee payment of an agreed tariff for power generated, on a “take or pay” basis. Essentially this means that irrespective of power demand by the grid, if the power is generated by the renewable plant, the tariff will be paid by Eskom for each kilowatt of energy produced. In light of this, investors place much reliance on the historical wind or solar resource studies to under-pin the budgeted project cash flows and equity returns.

Investments into renewable energy projects potentially represent a new and growing asset theme in the South African capital markets and will offer a unique opportunity for our clients to access a pool of assets not normally available to institutional investors. They qualify under client mandates for energy investments including the Infrastructure and Development Bond Fund and will contribute to the massive increase in development of clean and sustainable energy envisaged over the next few years.