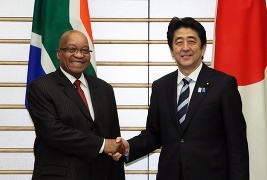 Despite the economic downturn, South Africa remained a country with great opportunities and was an attractive destination for investors seeking sustained returns, Deputy President Cyril Ramaphosa said in februari 2016.
He was speaking at a breakfast meeting with the Keidanren, the Federation of Economic Organisations of Japan, in Cape Town. The meeting was held as part of moves to build closer ties with the Asian country in an attempt to realise the goals of South Africa’s National Development Plan. He said the country had a solid record of prudent fiscal management and sound macroeconomic policies, with a vibrant and resilient democracy.

Keidanren is Japan’s most influential business federation, representing the top Japanese multinational companies with the highest volumes of global business. The federation was on a four-day visit to South Africa.
“We are an attractive investment destination,” Ramaphosa said. “We are pursuing measures to fundamentally transform our economy, ensuring that it is more productive, more inclusive and more sustainable.
“South Africa also has a diversified economic base with developed industries in areas like resources, manufacturing, retail and services; advanced financial and communications infrastructure and extensive road, rail and port facilities.”

The country also had a young workforce that was poised to power a new wave of production and growth.
The breakfast followed a working visit by Ramaphosa to Japan in August 2015.
See more from that visit:

He used the meeting to call on the Japanese to explore how investment and trade between the two sides could contribute to key objectives such as job creation, industrial development, human resource development and innovation as part of implementing the National Development Plan. Japan could help emerging black industrialists in accessing markets, skills and technologies, said the deputy president.

“We look to Japan to assist our country in the development of a thriving hydrogen economy. We look to Japan to invest in our ocean economy and aquaculture and provide training in boat building and ports management.
“We look to Japanese companies to work with our businesses and people to invest in water and sanitation projects, agriculture and agro-processing. Japan’s companies are well poised to work with us in the beneficiation of our mineral wealth.” The government, he added, was already in the process of making it easier to do business in the country. “We are fast-tracking the implementation of the Invest SA initiative, which is a one-stop investment shop to assist investors in meeting all the necessary legislative and regulatory requirements.” This would reduce the cost and complexity of investing in South Africa and would ensure government departments and agencies were more efficient and responsive.

South Africa’s growth plan included an injection of new entrepreneurial support for previously disadvantaged groups. “We are supporting the emergence of a new generation of black industrialists. We are using this programme for skills development and improving standards, quality and productivity. We are also providing access to finance and assisting with entry into new markets. In addition to the breakfast meeting, Keidanren will engage with Business Leadership South Africa and Black Business Council within the framework of Japan – South Africa Business Forum, says the Presidency. Japan is South Africa’s third largest trading partner. There are about 130 Japanese companies in South Africa, employing over 150 000 people.

During his 2015 visit to Japan, Ramaphosa expressed appreciation for the relationship between the two countries. He invited Japanese businesses to explore opportunities presented by the National Development Plan’s ambitious programme for fundamental economic and social transformation.