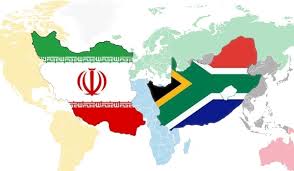 Deputy President Cyril Ramaphosa is reportedly scheduled to visit Iran, where he is expected to rebuild trade ties between the two nations. Ramaphosa’s spokesman, Ronnie Mamoepa, did not confirm a date when the deputy president would be travelling to Iran. According to a City Press report yesterday, Ramaphosa’s visit would be another big move in strengthening trade ties between the two countries after the lifting of international trade sanctions against Iran last month. This followed the nuclear disarmament deal the country negotiated with the United States.
The trip will follow a visit to Iran this week by a South Africa Joint Business Council delegation led by Sello Rasethaba, the shipping trade businessman and co- chairperson of this new bilateral council. It is part of the Black Business Council. Mahmoud Soroush, counsellor to the Iranian embassy in Pretoria, said his country hoped that the trade value between the two countries would return to the levels last seen three years ago. In 2012, before sanctions were imposed, Iranian oil exports to South Africa stood at $3.5-billion (R45-billion today).

South African exports to Iran fell from R1.5-billion in 2007 to R250-million in 2014, while its oil imports from Iran had fallen to $100-million. Soroush said this was a clear indication of the effect of the global embargo on trade relations between Africa and the Middle East.

“South African companies in the sectors of agriculture, irrigation systems, telecommunications and industrial co-operation in the various sectors can also get involved. Banking relations and setting up shipping lines and air routes will also help increase relations between the two countries,” he emphasised.

The focus of the visit would be to stimulate mutual business prospects between the two countries, identify new business opportunities, promote technology and research exchange and develop education and skills transfer.
Rasethaba said the new relationship between the Iran and South Africa joint business councils would be used as a platform to strengthen economic ties between the business communities in the two countries, as well as to facilitate regular interactions between members of the councils and the two governments. “We need to work hard to get back to those trade levels before the sanctions. But unlike other countries, the South African government has consistently supported the government of Iran throughout the sanctions period,” said Rasethaba. “The terms of reference for the council will be signed when leaders of the two governments meet, whether in Iran or in Pretoria.”