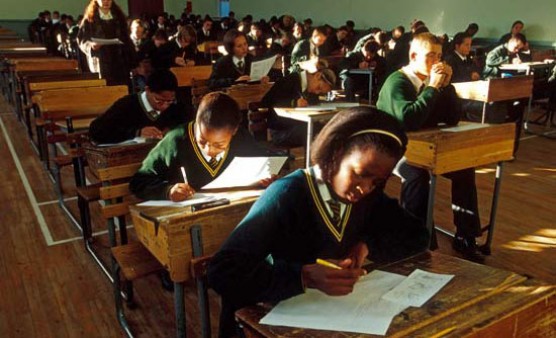 Blacks suffer most, as schools remain ill-equipped and children are ill-taught

South Africa spends a bigger share of its GDP on education than any other country on the continent. Yet its results are among the worst. Fifteen years after apartheid was buried, black children continue to receive an education that is vastly inferior to most of their white peers. Instead of ending inequality, as the ruling African National Congress (ANC) promised, the country’s schools are perpetuating it.

For Graeme Bloch, an education expert at the Development Bank of Southern Africa, his country’s education system is a “national disaster”. He says around 80% of schools are “dysfunctional”. Half of all pupils drop out before taking their final “matric” exams. Only 15% get good enough marks to get into university. Of those who do get in, barely half end up with a degree. South Africa regularly comes bottom or near the bottom in international literacy, numeracy and science tests.

University heads increasingly complain about students totally unprepared for higher education. Employers bemoan a dearth of skilled manpower, yet—by some measures—one in three South Africans has no job. A study of first-year students by Higher Education South Africa, the universities’ representative body, found only half the 2009 intake to be proficient in “academic literacy” and barely a quarter in “quantitative literacy”, while no more than 7% were deemed to have the necessary mathematics skills.

The ANC government has poured money into schools in black townships and rural areas in an effort to raise standards, yet black children still fare badly. Of the one in four who took matric maths in 2008, only 39% passed (despite a lowly passmark of just 30%), compared with 98% of whites; 28% of whites achieved a score of at least 80%, compared with just 2% of blacks.

Not surprisingly, the same story is repeated at tertiary level. Just one in ten black pupils qualifies for university, compared with more than half of their white peers. Whites, who account for 9% of the population, gained 42% of the degrees awarded in 2007, almost exactly the same proportion as blacks, who are nearly ten times more numerous.

Much of this discrepancy is to do with history. Under apartheid, blacks were kept down. By the end of the 1960s, the government was spending 16 times more on educating a white child than a black one. Most black teachers were (and still are) far less qualified than white ones. Black schools had (and still have) fewer facilities and much bigger classes. And most black children came from poor, ill-educated families where English, the main language of instruction, was not their mother tongue.

Today, all state schools are desegregated. But it is the better-endowed former white schools, with their continuing traditions of discipline, excellence and hard work, that still produce by far and away the best results. The top 10% of former all-black schools are also achieving some excellent results. But, as the Congress of South African Trade Unions recently admitted, many are “unsafe, bleak, uninspiring places, where violence and abuse are rife”. In many cases, said COSATU, they were “no more than dumping grounds for children.”

The latest matric results published this month showed a fall in the overall pass rate to 61%, compared with 73% in 2003. Though the pass rate has always fluctuated, the latest result has brought renewed heart-searching. Much of the blame has been attributed to the introduction in 1998 of a supposedly more child-centred “outcomes-based education”, designed to prepare children for a rapidly changing, technological world. But few schools had the resources to apply such ideas. The government now wants a return to greater emphasis on the three Rs.

But more than the curriculum or organisation of classes, it is the teachers who are largely responsible for South Africa’s abysmal results. Only 18% are professionally qualified graduates. Most spend barely half the officially required 6.5 hours a day in class, sometimes running their own businesses on the side. Many are not up to teaching at all. Yet their performance is not systematically monitored. Now, to the horror of the powerful teaching unions, President Jacob Zuma’s government is talking of reintroducing a schools’ inspectorate.

Not all is gloom. Many more black children are getting at least some kind of formal instruction than under apartheid. Around three-quarters of those aged 4-6 and 98% of those aged 7-15 are in full-time schooling, while the number of black university students has nearly quadrupled over the past 15 years. But with more than 5% of GDP being spent on education, South Africa is getting a rotten return on its investment.