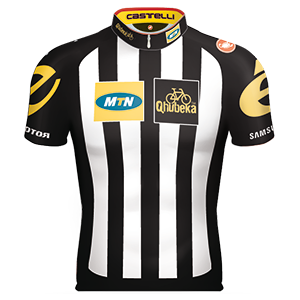 African mobile communications brand MTN has announced that it will ends its sponsorship of the MTN-Qhubeka team despite its huge success in the Tour de France.

Citing tough market conditions‚ MTN said it had to reassess‚ not just the Qhubeka sponsorship‚ but a number of other engagements.

“We feel we don’t have a return on that investment at the levels of comfort to us‚” company’s group corporate affairs executive Chris Maroleng reportedly told Times Media in an interview in Johannesburg.

Maroleng said MTN had told the team of its decision after the Tour had ended on Sunday. MTN reportedly spent close to six million Euro sponsoring the team since 2013, but the company has been under financial pressure due to tough trading conditions.

Cyclingnews understands that the team knew that MTN was considering its future sponsorship during the Tour de France but news of a full withdrawal has come as a surprise.

The MTN-Qhubeka team was one of the revelations of the Tour de France after receiving a wild card entry to the race. Steve Cummings won stage 14 to Mende and the team had 14 top-10 finishes, was fifth in the team classification and Serge Pauwels finished 13th in the general classification. Eritrean rider Daniel Teklehaimanot also held the King of the Mountains jersey for a few days.

New sponsor Dimension Data, who is also a technical and data sponsor of the Tour de France, is likely to step up as a new title sponsor but a formal announcement has yet to be made. The team has been linked to Mark Cavendish for 2016 and is looking to signing new riders and extending contracts with existing riders such as Steve Cummings and Louis Meintjes but still has to finalise its budget for 2016.

Despite the loss of MTN as a main sponsor in 2016, team principal Doug Ryder insisted the future of the team was secure.

“The team has many options going forward‚ huge interest as you can imagine‚ so the future of the team is incredible. There’s no issues there,” Ryder told South African media.