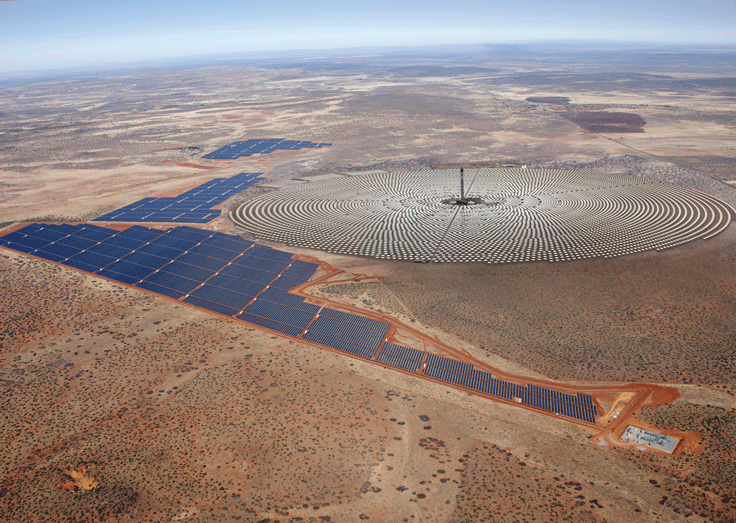 The first of its kind in Africa, the Redstone Solar Thermal Power Project features Solar Reserve’s world-leading molten salt energy storage technology in a tower configuration. The 100 MW project with 12 hours of full-load energy storage will be able to reliably deliver a stable electricity supply to more than 200,000 South African homes during peak demand periods, even well after the sun has set. Fueled completely by the sun, with no back up fuel required, the project also features dry cooling of the power generation cycle as an important element to minimize water use.

“The Redstone project marks an important technology advancement for South Africa in solar power,” said SolarReserve’s CEO Kevin Smith. “Due to the fully integrated thermal energy storage, the plant will provide dispatchable power on-demand, just like conventional coal, oil, nuclear or natural gas-fired power plants, but without the harmful emissions or hazardous materials and without any fuel cost. In addition, the project’s delivered electricity price is the lowest of any Concentrating Solar Power project in the country to date.” Smith added.

The Redstone Solar Thermal Power Project will be located in Postmasburg, near Kimberley in the Northern Cape Province, adjacent to the 75 MW Lesedi and 96 MW Jasper photovoltaic (PV) solar power projects successfully developed by SolarReserve and its investment partners. Together, the three projects comprise the world’s first combined CSP and PV solar park with a total of 271 MW of generating capacity.

The Redstone project will create more than 800 direct jobs during the construction phase comprised of craft workers on site and will also create significant additional jobs related to equipment supply, manufacturing, engineering, transportation and other services. Over 40% of the total project value will be provided by South African suppliers – a portion of which will support BBBEE activities. South African companies will provide investment in the project of at least R2.4 billion and the tax revenue forecast contribution for the Redstone project is estimated to be in excess of R6 billion in income tax over the first 20 years of operation. In addition, during the more than 30-year operating life, the project will expend over R150 million per year in salaries and other operating costs, including land, insurance, and maintenance activities.

The South Africa Department of Energy (DOE) awarded preferred bidder status for the 100 megawatt (MW) Concentrating Solar Power (CSP) project to the consortium led by SolarReserve, and International Company for Water and Power Projects (ACWA Power). The project was developed in response to the DOE’s Round 3 (CSP) Renewable Energy Independent Power Producer Procurement Programme (REIPPPP). The Redstone Solar Thermal Power project, with the lowest tariff bid to date from any CSP project in the country, is scheduled to achieve financial close later in 2015 and commence operations in early 2018.